How to Pitch a Tent

It is, of course, possible to pitch a tent almost anywhere, but for the sake of comfort, it is well to select a site with natural drainage.

Many campers dig a shallow trench around the tent to prevent water from running in during a heavy rain. This is a good idea for the permanent camp, but is not often necessary if the soil is sandy or porous, or where a sod cloth is used. It is rarely necessary to carry the regular poles to the camping ground, and they may be omitted except when en route to a treeless region.


The wall and other large tents may be pitched in several ways. In some places the woodsman cuts a straight ridge pole, about 3 ft. longer than the tent, and two crotched uprights, 1 ft. or more, longer than the height of the tent.

The ridge pole is passed through the opening in the peak of the tent, or fastened to the outside of the ridge with tapes sewed to the cloth. The two upright stakes are then firmly planted in the ground, one at the back and the other in front, and the ridge pole is lifted and dropped into these crotched supports. 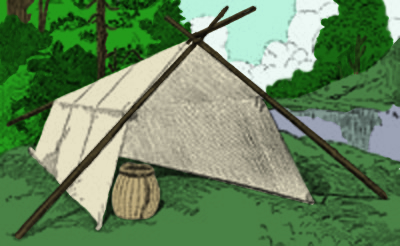 Set up the four corner guys first to get the tent in shape, then peg down the side guys and slide them taut so that all of them will exert an even pull on the tent. Another good method for setting up the side guys is to drive four crotched stakes, each about 4 ft. long, somewhere near 3 ft. from each corner of the tent, and drop a fairly heavy pole in the rest, then fasten the guy ropes to this pole. When a sod cloth is provided it is turned under on the inside, the floor cloth is spread over it and the camp duffel distributed along the walls of the tent, to hold it down and prevent insects and rain from entering.

To overcome the disadvantage of placing the poles in the center of the entrance, the uprights may be formed by lashing two poles together near the top to make a crotch and spreading the bottoms to form a pair of shears. Poles may be dispensed with entirely, providing the tent is ordered with tapes for attaching a rope to suspend the ridge of the tent between two trees. In a wooded country this manner of setting a tent is generally preferred.

Where a wall tent is used in a more permanent camp, it is a good plan to order a fly, a couple of sizes larger than the tent. This should be set up by using separate poles and rigged some 6 or 8 in. higher than the ridge of the tent, thus affording an air space to temper the heat of the sun and also serving to keep things dry during long, heavy rains.